NEWS The Exchange sells ’A Gift From Bob’ to UK, Germany, China (exclusive)

The Exchange has closed key territories on Cannes virtual market screening A Gift From Bob starring Luke Treadaway, led by deals with Lionsgate UK, Leonine for Germany, and DDDream for China.

The film marks the sequel to 2016 release A Streecat Named Bob and is on track to complete post production at Twickenham Studios in time for a 2020 December holiday season release.

The story returns to the life of James Bowen, a busker and recovering addict whose life was transformed after he met a stray ginger cat.

O’Shea and Nat McCormick of The Exchange are executive producers with Mick Southworth, Martin McCabe and Phil Burgin of Enriched Media Group, and Perry Trevers of Studio Pow, and Adam Coburn and Pete Bury. Bowen and Jenkins, who wrote the book on which the feature franchise is based, also serve as executive producers.

“We are thrilled to be bringing this joyous and inspirational sequel to the UK this year,” said Lionsgate UK president Nicola Pearcey. ”Bob the cat was a great inspiration to James and this story sees how this very special cat helped a homeless man off the streets at Christmas. At a time where we can all use a feel good and heart-warming pick me up, this film is the perfect remedy.” 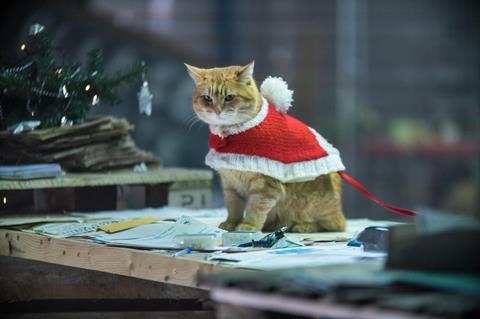